Boonta Vista bought my attention to this article in the Wall Street Journal regarding the Executive Time Use Project.

The headline figure is that the average CEO works 55 hours a week. Already this is less than the big numbers that often get waved around about this sort of thing- most of the folk wisdom would probably be numbers like 70, 80 or 90 hours- at least 60!

When you look at the fine print though, it’s actually much less than that: 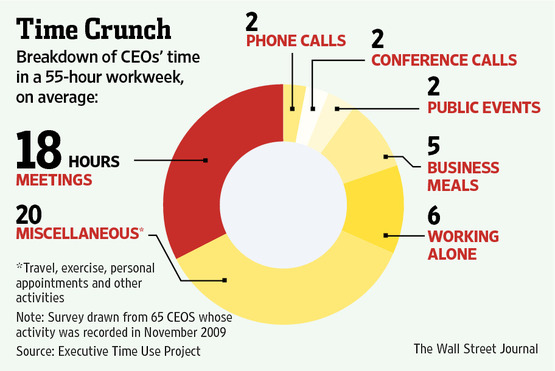 See that Miscellaneous category? It includes “Travel, exercise, personal appointments and other activities”.

Well I don’t know what “Other activities” are, but if they’re anything like “Travel, exercise and personal appointments” they’re not really counted as work for most people. In other words, the named activities in the miscellaneous category aren’t actually work. Do you get to count travel time, going to the gym or a hairdresser appointment as work?

So subtracting the miscellaneous category we get 35 hours per week. That’s not even all of 9 to 5. And don’t forget that 5 hours of lunches and dinners are being counted through “Business meals”, which is pretty cushy work if you can get it.

Now you could argue that the average wage slave also manages to evade some of their hours as well, and perhaps the travel category is contestable, so I’m not going to try to argue that the average CEO works less than the average full-time worker (though on the data presented they may well). However these CEOs certainly don’t have their grind on, so to speak, to any appreciable degree.

And this isn’t even to mention the inefficiency with which the bona fide working hours are used: x3 as much time spent in meetings than working alone cannot be effective.

Although it contradicts popular stereotypes, we shouldn’t be surprised by this (relative) sloth. If the rent extraction theory of CEO pay is correct, we would expect CEO’s to extract plenty of leisure time as well as plenty of money.

In light of all this, the Executive Time Use Survey’s motto:

“Nothing else, perhaps, distinguishes effective executives as much as their tender loving care of time.”

Is frankly a little on the nose.